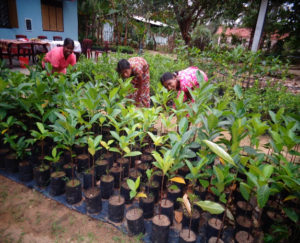 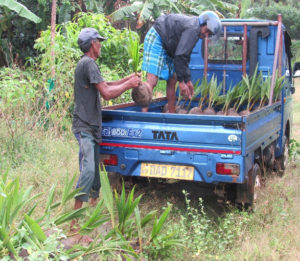 Improving Home gardening plays a vital role in bridging the gap between family income Vs. expenditure. Also the practices of crop farming with or without livestock farming is a common practice among the large majority of families in resettled areas .
Crop farming can refer to a business or enterprise in which an agri-entrepreneur endeavors in the commercial production of crops. Some individuals own or lease some acres of farmlands, while others engage in selected crops for profit. Some examples are Paddy, sugarcane, Papaw, banana and other fruit crops and vegetables. But for those poor marginal farmers, in particular belong to resettled families it is a means of livelihood and sustenance for the basic needs of the family. Many of them are barely managed family expenses and are always short of cash for agro product actions and also without easy access for planting material. It was also a common factor that a large number of fruit and shady trees were destroyed during the war. In order to fill up the identified gaps RAHAMA with the support of District authorities started a plant nursery to supply plants mainly to resettled areas. The key objective of this initiative is to ascertain environmental conservation and growth of income of marginally earning families through crop farming activities. 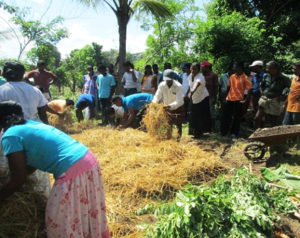 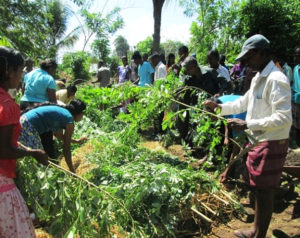 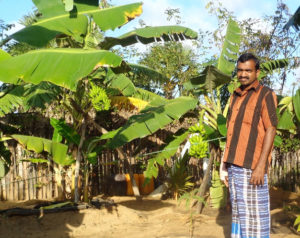 The latest researches indicate that the application of chemical mixed insecticides and fertilizer is the main cause of the widely spreading infections such as kidney diseases. Spreading such menaces is one of the latest hazards in particular in the Northern and North Central Provinces of Sri Lanka.

Thus RAHAMA initiated a pilot project in collaboration with relevant departments to produce organic manure as an initiative to assist farming communities to find secured path of Agro based actions. This pilot project for producing organic fertilizer is well accepted by the farming communities in the Northern region of Sri Lanka, yet, new initiatives for raising awareness of certain segments of the community is a need.

Department of Agriculture, Mahawali Dev. Authorities and the Divisional Secretaries in respective divisions, Medical Officers, Partner organizations of RAHAMA Sri Lanka are the central stakeholders of this program. This programme was started this year as a model project and will be replicated into other locations too, once the quality of product and once the cost factors are determined. Joint effort with the intervention of stake holders are envisioned to raise awareness of the farmers’ via cooperatives on the advantages in switching into the usage of organic manure.
Most of the program beneficiaries are women and this will support the economic improvement of the families and preserved environmental elements such as soil, water/ and the unpolluted air.

Turmeric is one of the multi-use products which has many valuable possessions and uses such as in food, textile, medicine and cosmetic industries. The positive Chemical composition of Turmeric cultivated in Sri Lanka is assessed to be in higher quality due to the contextual attributes of the soil in particular in the Northern districts. RAHAMA in collaboration with the Dpt. of Agriculture designed a pilot project to assist few farmers to cultivate Turmeric in Jaffna District also having negotiated with a company in South India to export the processed stocks of Turmeric.
The project aimed at to raise incomes of micro-level householders in Northern districts of Sri Lanka by providing essentially needed assistance to carry out Turmeric cultivation. Though, overall plan was to cultivate 50 Acres of Turmeric in order to assist 150 farmers, the pilot project was designed to cover an extent of 5 Acres. It is also expected to create value addition to the raw product to suit the export market. Raising awareness of targeted farmers was given higher priority partly to meet the quality requirement on export market needs and also to see how weather could affect a large scale of cultivation while also stressing on good practices to control product costs in comparison to farm-gate prices.

RAHAMA proceeded with the cultivation with the support of AVT Co. Ltd., India and also in collaboration with officials of the Dept. of Agriculture, DSs and Heads of Farmer Organizations. Since this was a joint project the import company met the cost of operation while RAHAMA managed the operational costs including the implementation of the pilot project. At the end of 2017 the harvest was exported to India after drying, cleaning and packaging. When the overall outcomes are concerned, the farmers did their part in a good manner, yet, unexpected drought affected the expected quantity of harvest. The final assessment revealed that the product quality was 90 % mainly due to the first-hand experience of farmers on Turmeric cultivation and predominantly owing to the unfavorable weather conditions. Fresh plan of action on new Turmeric project is under preparation.